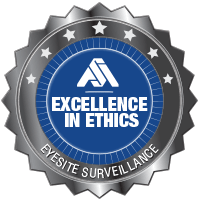 The American Subcontractors Association, a national trade organization representing construction subcontractors, specialty trade contractors, and suppliers, presented its National Excellence in Ethics Award to EyeSite Surveillance, Inc., Chandler, Ariz., and 12 other construction subcontractors during an awards gala on March 5, 2016, in Miami, Fla. The awards gala took place on board the luxury yacht The Biscayne Lady and was held in conjunction with ASA’s annual convention and 50th anniversary celebration, SUBExcel 2016.

Applicants of the ethics award are required to respond to questions concerning the firm’s corporate ethics, policies and procedures, its construction practices, and its general business practices. Each applicant is also required to submit detailed documentation, including sealed letters of recommendation from a customer, a competitor, and a supplier.

The award’s criteria include the use of a standard subcontract whose provisions substantially reflect the best practices incorporated into the ASA-endorsed ConsensusDocs 750 Standard Agreement Between Constructor and Subcontractor, as well as highly favorable evaluations from three specialty trade contractors, based on 20 project management factors. EyeSite Surveillance has received this Award 2 years in a row.

ASA was Founded in 1966, ASA amplifies the voice of, and leads, trade contractors to improve the business environment for the construction industry and to serve as a steward for the community. The ideals and beliefs of ASA are ethical and equitable business practices, quality construction, a safe and healthy work environment, and integrity and membership diversity.

Customer service, at its core, is about trust.

When you make a decision to use EyeSite Surveillance, Inc., you are making a decision to trust that they will work hard to protect your assets. This trust must be earned and then reaffirmed throughout the working relationship. The commitment of EyeSite is to exceed customer expectations in developing the best technology and combining it with the best customer service experience to promote a more secure site. If you are ready to experience all that EyeSite has to offer, click here www.GoEyeSite.com or call 1 (855) 466-8433 (1-855-4No-Theft).